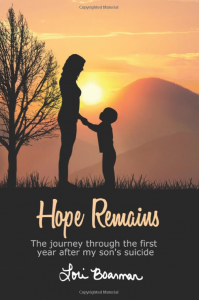 Hope Remains: The Journey Through the First Year After My Son’s Suicide by Lori Boarman

Lori lost her son Logan when he took his life in December of 2017. As her life and the way she knew it was altered forever, she used writing and social media as a way to process her grief. By doing so, she began creating awareness for suicide and mental health, which fulfilled a new purpose and encouraged her to continue. This book is a synopsis of her posts, a journal-like account of the struggles faced by Lori and her family through the aftermath of the “What Ifs” and the things they found hope in.

It is for those that want insight into the never-ending journey of losing a child, especially by suicide. It’s for those that are struggling through their own demons, and looking for hope, options, and support.

It’s for those that have joined the club and lost their own children. Offering the realization that your state of mind and reactions are normal, and that you aren’t alone in them.

A real-time glimpse inside a mother’s heart over the first year after losing her son.